Along with more than $1,000 in support directly from staff and members of the APW community, school counselor Rick Algie raised a total of $3,487 before playing 100 holes of golf to benefit the McMahon Ryan Child Advocacy Center.

Algie said the amount he raised was humbling, adding the money APW raised helped make the school a flag sponsor.

“Thinking about what we raised gives me chills,” said Algie. “APW is absolutely a family that I’m proud to be part of and I’m extremely grateful to all those who donated to the cause.”

In total, 22 golfers raised $102,488 that will provide support to area children and families who are victims of abuse.

Noting the most golf in one day he’d played before was 72 holes, Algie said he was “exhausted” after the lengthy day, but “the feeling of accomplishing a golf marathon all while supporting students was very rewarding.”

Algie, who singled out local businesses World Fuel Services and International Wire for their generous donations, said he is already looking forward to participating in the tournament next year. 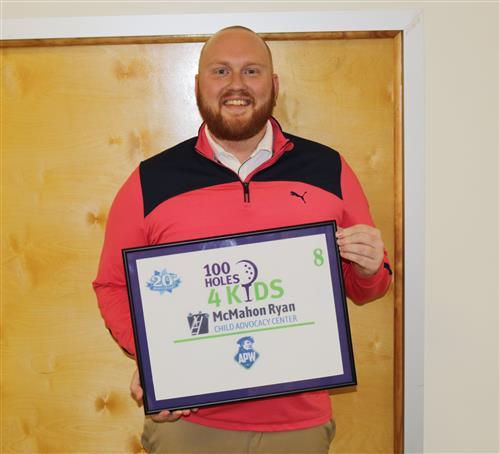 APW Counselor Rick Algie recently raised nearly $3,500 for the McMahon Ryan Child Advocacy Center and participated in the golf event 100 Holes 4 Kids. APW raised enough money as a district to be a flag sponsor at the event, which Algie is pictured holding.