Altmar-Parish-Williamstown Central School District has announced their valedictorian and salutatorian for the 2021 school year.

Valedictorian Amelia Auringer plans to attend SUNY ESF for architecture after graduation. She says she enjoys science and conservation but also art and design and aspires to get involved in city planning or in making marine environments more sustainable.

To the APW students she leaves behind, Auringer’s advice is to “make sure you stay on top of projects by doing a little at a time, and don’t be afraid to ask questions."

Salutatorian Kathryn Trumble plans to attend SUNY Buffalo for Neuroscience and dreams to do research and work as a professor one day. She says she wants to understand the brain to be able to help fight against addictions and depression.

Trumble is a four-sport varsity athlete and was the captain of the basketball and volleyball teams. She is also the drama club president and has participated in drama for nearly six years. Other extracurriculars for Trumble include National Honor Society, OCAY League and yearbook club. She shared that her favorite class was also A.P. U.S. History.

To her fellow classmates, Trumble says, “Don’t sweat the small stuff. It doesn’t have to be perfect; it just has to get done.”

Both Trumble and Auringer spoke to their favorite high school memory of just spending time with their friends. 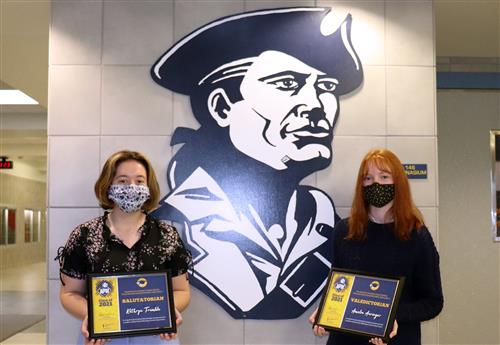